SM48 Vs SM58: The Industry Standard Takes on the Value Champ

Shure created an industry-standard when they released the SM58 dynamic microphone all the way back in 1966. Since it has remained relatively popular over the years and is built like a tank, don’t be surprised to see at least one or two of these lying around in studios everywhere.

But not everyone is willing to part with the $100 that the SM58 currently retails for. Luckily, Shure has other offerings that cost a little bit less without sacrificing too much in terms of quality. One such example is the $35 SM48. 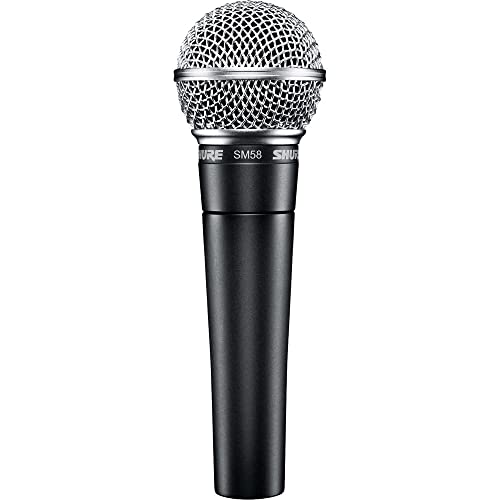 The SM58 is a versatile and reliable classic that gets the job done no matter the situation.

Whether in a performance or a studio setting, it’s going to be a great performer.

The SM48 carries a lot of the qualities of its older, more expensive brother but does so in a significantly less expensive package. With a little practice on your technique, you might be able to bridge the gap between it and the SM58 with just your mic technique.

We’re an affiliate
Every product is independently selected personally by us. Things you buy through our links may earn us a commission. Thank you if you use our links, it’s much appreciated.

If the SM58 Is Such a Great Overall Mic, Why Consider the SM48?

In today’s world, content is king. However, the audio requirement for different media is not a one-size-fits-all type of deal. For some media, the SM58 might be a bit of an overkill especially considering the price gap and the narrow margin in terms of quality.

Knowing that the similarly spec’d SM48 is significantly cheaper than the SM58, it’s worth considering the less expensive mic if you’re doing projects that won’t be consumed by discerning audiophiles.

What We’re Going to Discuss

For trained ears, there would be a noticeable difference between the two microphones. Is this difference something that should even influence your buying decision? This is what we’re aiming to find out. To do this, we contemplate the following:

First let’s breakdown the technical info for both mics.

Perhaps durability is a feature more attributable to the brand than the SM58 and the SM48. Shure’s range of products has this quality in common.

The SM58’s durability is the stuff of legends. There are countless videos online where people torture tests the microphone. They ran it over a pickup truck, put it in the barbeque, and even tossed it into the ocean. None of them was able to break it.

Other than getting its grille dented after running it over with a pickup truck, the microphone functioned properly after all three tests. Suffice it to say that rock stars won’t be able to destroy it like their guitars.

While it doesn’t have entire videos dedicated to its durability, SM48 feels similarly built. It’s got the same full metal construction on the handle and the same materials for the grille.

A night out at the karaoke, therefore, should be no problem for this mic even if it’s dropped as it’s being passed around or have beverage spilled on it.

Cable length is important for vocal microphones so speakers and singers can make the most out of the stage. This makes having a rated impedance of 150Ω is a great feature to have for both of these mics.

This feature made the SM58 so well-loved by performers. It’s a no-compromise microphone that doesn’t restrict users from moving around. This helps performers really own the stage.

For such an inexpensive mic, the low impedance on the SM48 is a welcome feature. Longer cables can mean better maneuverability which is great for both stage performances and karaoke sessions.

Handling plosives is something that these mics handle well because of the built-in pop filters. So, whether you’re speaking or singing, you’re not going to get decent plosive cancellation on both mics.

Its pop filter works perfectly. P, T, and K sounds shouldn’t sound annoying as they do in cheaper microphones. This makes it a much more user-friendly microphone that most people can use out of the box. Even people with very little experience in using a mic would not suffer from plosive sounds.

While it comes equipped with its own pop-filter, the SM48 doesn’t handle plosives as great as the SM58. The quality of the pop-filter on the SM48 may be one point where Shure decided to cut costs. If you don’t have a polished mic technique it may be best to use the SM48 with additional wind and pop-filter.

Both of these mics sport a cardioid pickup pattern that focuses on sounds directly in front of them. It’s particularly adept at picking up vocals.

The cardioid pattern on the SM58 is one of the reasons why it has become such an industry legend. It picks up vocals really well while avoiding sounds coming from the back.

There is almost no feature in which the SM48 does better than the SM58. But, the beautiful thing about it is that it comes so close even if it costs less than half the price of the SM58.

In the case of the SM48, the price becomes a unique feature that it has over the legendary SM58. It does everything well enough to be discussed in the same league even if their prices are not even close.

The SM58 being pricier than the SM48 should only mean that there are more features packed into the mic. This is exactly the case if you look at the frequency response and output level.

The difference is not too evident when recording medium pitched voices. However, if you’re faced with having to record people from the opposite sides of the frequency spectrum, you’ll definitely notice that the SM58 handles way better than the SM48. For podcasters who have to interview a wide range of people’s voices, this feature would definitely come in handy.

The cardioid polar pattern and pop-filters work so well that both these mics seem relatively quiet. This means that you have to turn up the gain quite a bit especially when recording soft sounds or vocals.

The SM48 handles well because it has a built-in shock mount. However, the SM58 has one-uped it by having a pneumatic shock mount. This reduces handling noise by quite a bit more compared to the SM48.

Below is a breakdown of the good and the bad of each of these microphones. For a quick overview of the perks and downfalls, read on and you’ll soon have an idea of which mic will work best for you.

The SM58 is an industry-standard for a reason. It’s versatile, reasonably priced, and produces a sound quality that can punch it out with mics from higher price categories.

So, to someone looking for a mic for recording vocals, whether they’re a beginner or an expert, the easy answer is the SM58. Professionals who depend on audio quality should get this mic.

But, if there’s not a lot of cash to spread, the SM48 isn’t a bad choice at all. It’s relatively close in terms of performance with a price gap that doesn’t hurt too much as long as you’re informed of the compromises.

For some professionals such as pod casters and singers, the SM48 may be a good enough performer to get the job done.