Scarlett 2i2 vs 2i4 which audio interface is best? The Focusrite Scarlett 2i2 interface has been the industry-best compact portable recording interface for a while now. But recently, its maker, Focusrite, has introduced an enhanced version of the 2i2 they’re cleverly calling the 2i4.

It features the same XLR-1/4 inch combo inputs as the 2i2 and the same pair of outstanding preamps. But it also adds a Stereo/Mono switch, surge protection, two additional outputs, MIDI I/O, 24bit/192kHz A/D resolution, and more to the mix.

It makes us wonder if the days of the 2i2 are numbered. Or is there still a market for it based almost solely on its build quality and low price? In this comparison review, we’re going to find out. 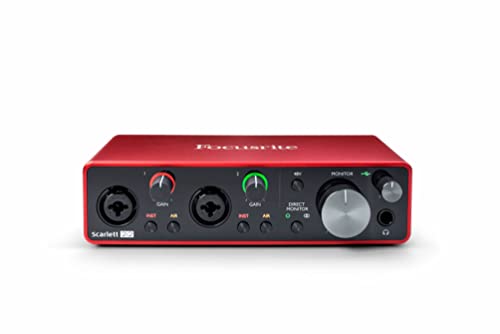 The Focusrite Scarlett 2i2 features a pair of high-quality preamps that allow you to record professional-quality sound wherever your travels take you.

The Focusrite 2i4 provides everything you get in the 2i2 and adds a half dozen new features that will have audiophiles drooling. It’s also significantly smaller than the 2i2.

Scarlett 2i2 Is All You’ll Ever Need, Isn’t It?

The 2i2 Scarlett interface made a lot of friends when it hit the market and, for some time, was considered the best portable desktop recording interface for the price. It still might be for the price. But with the 2i4, it’s going to be hard to justify not spending a little more to get the added functions.

What We Were Looking For

Making the argument for the 2i2 didn’t use to be complicated. Any time you paired it up against a competitor, it would win the day with its two outstanding preamps. Now with the 2i4, you get those same preamps, and direct monitoring, and more. Plus, a rash of new features that the 2i2 can’t compete with. So what we want to know is:

When comparing the 2i2 with other desktop interfaces a lot is made about how the 2i2’s pair of preamps set it apart from most of the competition. Well, that argument is moot here. Because both of these interfaces share this same outstanding feature.

What is there to say? If you have your guitar-playing hombre over for an impromptu recording session, you can plug in both guitars and both mics and have at it.

The ability to plug either mics or line devices like guitars or tape players in to same connectors gives both the 2i2 and 2i4 an advantage over interfaces (and there are quite a few) that feature either the XLR only or 1/4 inch only inputs. This does not qualify as a revolutionary feature, but it is certainly nice to have and could wind up saving you a lot of hassle.

Of course, a more extensive, more powerful audio interface will have plenty of XLR and 1/4 inch inputs. But we’re talking about portable desktop devices here. So whatever such a device can do to make your experience easier is a big plus.

The 2i4 offers the same number of XLR-1/4 inch combo inputs as the 2i2 is primarily notable because the 2i4 is considerably smaller than its predecessor.

Why? For instance, perhaps the quality of the preamps on one company’s device would be superior to those of the other company. But here, the preamps on the 2i2 are the same as the 2i4 preamps. So are the inputs.

Which focusrite scarlett interface are you leaning towards?

From a performance standpoint, there are no features on the 2i2 that we would take over the 2i4 if we had our choice. The 2i4 is an upgrade of the 2i2, and so all its features are either the same or unique to the 2i4.

It was allowing you to get more from your compact desktop interface. The only notable thing that sets the 2i2 apart is its price.

Many young creative types don’t have a ton of money to spend on a desktop recording interface. For those budget-minded individuals, the 2i2 is a perfectly acceptable option for an audio interface that’s under $200. Almost everything about it is first-rate and the only thing separating it from the 2i4 is that the 2i4 has several new features added on.Unique Features: 2i4

Direct Monitoring with Option to Blend

Many folks love the fact that you can choose either latency-free direct monitoring on your headphones or switch to a blend of natural and standard playback monitoring.

The MIDI I/O enables more robust manipulation of your DAW by way of software instrumentation. This allows the audio creator in you to produce more feature-rich music than would otherwise be possible.

Why? Because it offers everything the 2i2 offers, plus a couple of other features, the 2i2 does not. Essentially, it’s the difference between a nice car and an excellent car with high-performance tires, an eight-cyle, rather than a six-cylinder engine, and four-wheel disc brakes.

Below we’ll go through the pros and cons of each audio interface:

Pros of Scarlett 2i2

Cons of Scarlett 2i2

Pros of Scarlett 2i4

Cons of Scarlett 2i4

If you’re a serious creator, and you sometimes collaborate with other artists, and you can afford to spend an additional $70, there is no reason why you shouldn’t get the 2i4.

Its robust feature set makes that choice a no-brainer. If, on the other hand, you are working with a fairly tight budget and you want to get the most bang for your $130, you can’t lose with the 2i2.

So it all comes down to how much you have to spend. If it’s our money, we’re biting the bullet and spending the extra 70 bucks on the 2i4.