In the days of old, when you compared products with different brand names, it was safe to assume they came from other companies. Not anymore. Corporate consolidation has put an end to that.

That said, these two have been dueling it out for the affection of audiophiles since the M32 hit the market about six years ago. And opinions regarding the superiority over the other tend to focus on which is the better value.

Rather than which is the more capable mixer? In this guide, we will look at both aspects of these digital consoles and determine which is the wiser purchase.

You Get More But You Pay More

The M32 was late to the ball, but they made a power entrance that turned many heads. When most people think of Midas boards, they envision the $100,000 consoles at Abbey Road Studios. But is this “discount” Midas console capable of overpowering the X32?

More Than a Sentimental Favorite 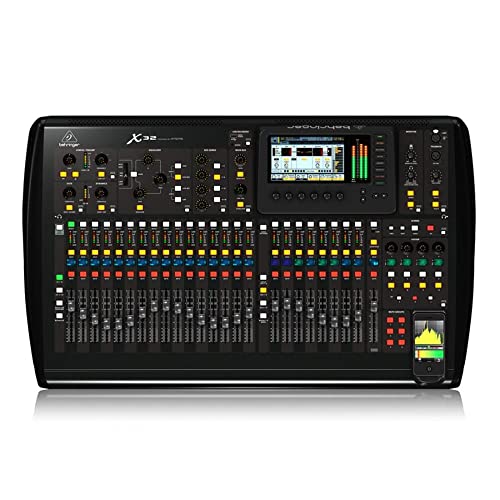 Feature-rich and affordable, the Behringer X32 is arguably the most popular mixing console there has ever been. It’s ready for anything with 32 mic preamps (hence the name), 16 XLR outputs, and half a dozen aux inputs.

The most common argument in favor of the X32 is that it’s such an exceptional value. And that’s true. It is. But does that mean it’s the best digital mixer for your recording studio, theater, or club? Or will you wind up banging your head against the wall due to its limitations?

There’s only one way to find out. Test those limitations.

What We Wanted to Know

When it comes to determining which console would make a better addition to your recording studio, “value” is a potentially problematic consideration. After all, you’re not buying disposable razors. You’re looking for a board that will empower your creativity.

As such, compromises for the sake of value could end up holding you back. So, when we looked at these boards, these are some of the things we wanted to know:

First a quick breakdown of the technical specs of both digital mixers:

Something we neglected to mention above is that the reason Midas can afford to offer their M32 at what is (for them anyway) the very reasonable price of $5,000 is that it’s built almost entirely on X32 technology. So they didn’t have to do most of the R&D.

Once Music Tribe acquired both companies, they took the essential components of the X32 to create the foundation for the M32. And they then expanded on that foundation with genuine Midas Pro preamps, carbon fiber construction, and other features.

So the fact is, the two boards share a host of standard features. Too many to list here. But we’ll take a look at one for the sake of integrity.

We had to pick something, so why not that both digital consoles produce the same 0.8 ms latency? Since both share the same acceptable level of latency, it comes down to what audio product sounds better? That would be the M32.

The two boards share the same 0.8 ms latency because they share most of the same firmware. The rubber hits the road with the Midas preamps, which the X32 doesn’t have in comparison.

They may share the same 0.8 ms latency, but the sound that finally reaches your ears  doesn’t sound as warm and natural coming out of the X32.

Although they share a lot of the same software and other characteristics, one thing that truly sets the two boards apart is the preamps.

The Midas mixer M32 features 32 Midas preamps. They produce a wonderfully precise sound with just the right amount of warmth. The “Midas inspired” preamps in the X32 can’t compete.

This didn’t get into our feature list above, but it’s a pretty big deal. The M32 console angles up sharply, about halfway back. This makes access to things like the equalizer and bus controls much, much more manageable. This can potentially save you a lot of headaches and a lot of retakes.

This feature allows the X32 to be fully compatible with many of the most popular DAWs out there today, including Studio One, Pro Tools, DP, and many more.

The X32 weighs only about one-third as much as the Midas M32. Physically, it’s also relatively a bit smaller. This makes the X32 a genuinely portable, rack-mountable board you can slip under your arm and take anywhere. Something you wouldn’t think of doing with the M32.

Sorry X32 fans, but this just isn’t a fair fight. The M32 blows the X32 out of the water with the quality of its preamps and its much more user-friendly design. And we didn’t even mention the superior materials.

Each of these consoles have their pros and cons. Check them out below to decide which one is the better choice for you.

Pros of the Midas M32

Cons of the Midas M32

Pros of the Behringer X32

Cons of the Behringer X32

If you intend to set up a professional recording studio, it only makes sense to do it right. And the Midas M32 is the superior machine.

So instead of buying something now that will only need to be upgraded a year from now, it makes sense to bite the financial bullet and get the M32.

If, however, your aspirations are more modest, the X32 will answer the call for you and then some. Harman Kardon onyx studio 5 vs 6 : is it worth the upgrade?