Apollo Twin Vs. Arrow: Which is best Head-to-Head?

Universal Audio pretty much has the professional audio industry eating out of its palm by selling excellent quality products at attainable price points.

It’s no surprise then, that two of the bestselling professional-grade audio interfaces on Amazon are both made by them – the Apollo Twin Duo and the Arrow. The differences are subtle, but each one can be a make or break feature depending on your usage. 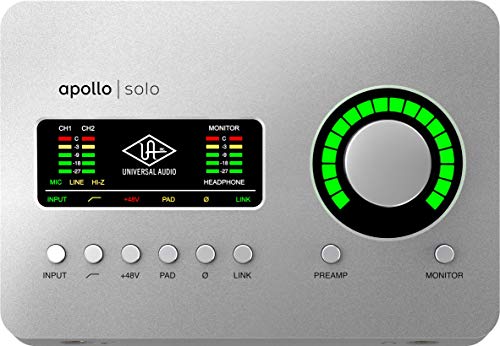 Record with all the plugins you want with zero latency because the Apollo Twin Duo has SHARC chips to help ease the digital signal processing load on your PC.

While both are excellent professional-grade audio kits, the price difference between them makes choosing one over the other literally worth hundreds of dollars.

The Apollo Twin Duo’s SHARC processors are worth considering but the Arrow is a bit more future-proof and mobile with its bus-powered Thunderbolt 3 USB Type C port.

When it comes to audio quality, the Unison-equipped preamps on these audio interfaces are pretty much similar in a raw recording.

However, there are a few notable differences that can be deal breakers for you to favor one over the other. These shouldn’t be a big deal if their prices were closer but the price gap makes the choice a bit more complicated.

You can, for example, put that $300 toward getting a better mic. So, to be able to make a conscious decision between these two, here are a couple of things we’re going to set our sights on:

First let’s breakdown the technical info for both interfaces.

These two interfaces, coming from Universal Audio, are bound to have a lot of similarities. The most prominent similarity between them is the magnificent Unison preamps. This ensures that both of these record crystal noise-free sounds.

The Arrow, especially when compared to others in the $500 price range, is such a strong performer because of the Unison preamps.

In this regard, both the Arrow and the Apollo Twin Duo have the same specs so they perform similarly. So, whichever one you get, you’re sure to record sensational music or vocals.

SHARC Processors lighten the load on your computer by processing the sounds directly in the interface. This lets you use plugins with relative ease.

The ‘Duo’ on the Apollo Twin pertains to the dual-chip setup inside the interface. This means that heavier use of plugins wouldn’t result in much latency. If you expect to autotune a lot, then this might be a better bet than the Arrow.

The Apollo Twin Duo wins this because two SHARC processors make it twice as powerful than the Arrow.

If you’re in the market for an audio interface equipped with SHARC processors, you’re most likely doing so because you want to use plugins. In this case, two is better than one because the extra processor would let you use even more plugins without feeling a single bit of lag.

Universal Audio doesn’t only have some of the most desirable hardware on the market, they also craft some of the best software. Luckily, if you buy either the UAD Arrow or the UAD Apollo Twin Duo, you’re also going to get a bunch of different software bundles too.

Few of the plugin giveaways are quite pricy in and of itself so you should factor that into the $500 price tag as well.

While the list of free plugins is generally the same, the Apollo Twin Duo sometimes comes bundled with a few more than the Arrow. One such free plugin promo was the Antares Auto-Tun Realtime Advanced which can cost upwards of $300.

These plugins sweeten the deal but it’s a fact that the Apollo Twin Duo sometimes comes a bit sweeter than the Arrow. Who knows, we may have similar deals for the Arrow someday. But, until that happens, this is a win for the Apollo Twin.

Thunderbolt is one of the most powerful connection technologies out there. It has a super-fast transfer speed that beats the traditional USB interface. Fortunately, both the Apollo Twin Duo and the Arrow have this built-in.

Thunderbolt is currently in its third generation and the Arrow has this version. This means the data transfers between the computer and the audio interface should theoretically be faster.

However, data transfer on the Arrow is limited by the processing power. If you’re using plugins heavily, the Thunderbolt 3 isn’t going to help you very much.

On the flip side, the Thunderbolt 3 technology comes in the form of USB-C so this should let you use your phone’s USB-C cord to connect your audio interface.

The Apollo Twin Duo comes with Thunderbolt 2 technology with its proprietary port. This means you’re going to have to buy a separate adapter just to plug it into your computer.

It also doesn’t allow power to pass through so you’ll have to plug in a separate power supply into a wall outlet.

From USB ports to 3.5 mm audio jacks, the Thunderbolt 3 is slowly replacing all computer connection interface.

Which one are you leaning towards?

One feature of Thunderbolt 3 is that other than data, it also allows power to pass through the cables. This means that other than your USB-C cable, you don’t need anything else to start using the interface.

If your workflow requires you to be mobile, then the Arrow is the one to get.

Want to record at the park? No problem. Using the Arrow with just your laptop battery is doable.

The Apollo Twin Duo lets you connect it with your Apollo audio interfaces to make one awesome production system. You can link up to 4 Apollo devices plus 2 more Satellites.

Below is a breakdown of the good and the bad of each of these interfaces. For a quick overview of the perks and downfalls read on and you’ll soon have an idea of which one will work best for you.

Pros of the Apollo Twin Duo

Cons of the Apollo Twin Duo

While the less expensive Arrow holds its own against the Apollo Twin Duo, it falls short where it matters. It lacks some basic features that professionals might need.

The cascade feature, for example, is a great way to make sure that professionals can be flexible no matter what the recording situation might be. The additional SHARC processor also ensures that it will be a reliable performer even if a lot of plugins are being used.

As for the Arrow, it can be a great backup interface to the Apollo Twin Duo. With a little research, you’d figure out how to cascade it with its more expensive brother. What audio interface brands do professional music studios use?

What is the best pop filter brand